Passion for two wheels: Scott and the perfect combination of Superbike and cycling

BMW Motorrad factory rider Scott Redding lives out his passion for two wheels with a 999cc engine on his BMW M 1000 RR and with the power of his own two legs on his racing bike. The Brit not only has his own professional racing team, SCRT Muc-Off (SRCT satnds for Scott Redding Cycling Team), but also regularly takes part in cycle races in England when time permits. For Redding, this is the perfect preparation for the demands of the FIM Superbike World Championship (WorldSBK).

Cycle racing is ideal to work on one’s physical fitness – and, as Redding is keen to emphasise, it also helps to control one’s weight: “I do a lot of cycling to keep my weight down. I weigh three kilogrammes less now than at the start of the season. That is all down to the fact that I have been cycling and burned more calories than I ingested. Generally speaking, it is good for my health and I enjoy it.”

However, this is just one positive effect. As well as helping his fitness, cycle racing also gives Redding a lot of mental strength for his WorldSBK races. “When I am cycling, I push myself to the limit,” he said. “When I now go racing and am struggling with the bike, the tyre is skidding and I am starting to get tired, then I know that I have a lot more still to give. In the cycle races, I put in so much effort that I hardly have any energy left at all. You don’t actually reach that level of exhaustion in motorcycle racing so I now always know that my energy levels are high enough to complete the race and battle right through to the finish.”

Redding always has his racing bike with him – even at WorldSBK race events it can always be found in his truck. When it comes to the final preparations for the race weekend, he takes his bike out with him for the Track Walk: “It allows me to identify bumps, what lines are available, what the asphalt is like, for example whether there are different types of asphalt, and whether I may need to take a different line to avoid a few bumps on the track.” He then benefits from this information when he heads out on the BMW M 1000 RR.

At the WorldSBK meeting at Donington Park (GBR), Redding, his SRCT Muc-Off team and the team support car provided by BMW all took to the track together. They were accompanied by Global Cycling Network, the world’s largest online cycle racing channel. They were there to make a documentary highlighting the parallels between cycle racing and motorcycle racing in which Redding goes into detail about his fascination for the sport. 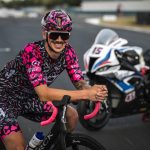 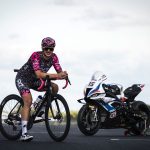 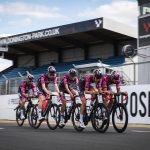 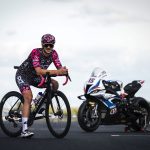 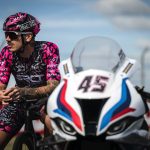